Since 1996, ESI has installed BILLIONS of square feet of geosynthetic liner systems across the United States.  That’s more than 2,000 environmental containment projects over the last 20 years in the solid waste, coal ash (CCR), industrial, mining and related markets.

The gallery below is a small sample of the total number of projects we have completed.  As we have done for the projects shown below, ESI can meet your company’s need for material supply and installation of geosynthetic materials and HDPE piping systems, for your environmental containment application.  Through our 20 years of business, we have developed a highly skilled and experienced workforce of nearly 400 employees who safely and efficiently complete projects on-time, with the highest level of quality.

Use the menu options on the bottom-left to filter projects based on solution or market. ESI provided materials and the installation of an 18-acre double-liner composite system for this natural gas storage pond in Mississippi for Primoris Services Group (the project GC). A geocomposite gas venting layer was placed directly on the subgrade with an 80-mil white conductive liner, geonet drainage layer, topped with an 80-mil smooth HDPE white conductive liner. The customer requested the two conductive liner layers as added protection against pinholes and leaks. The customer also asked ESI to weld water level measurements on the slope as shown in the picture on a textured 60-mil HDPE liner that served as a walkway. ESI also fused and installed more than 3,000 LF of HDPE pipe system to complete the drainage system. ESI recently completed the installation of a geosynthetic lining system for Morgan Corp – the general contractor for the construction of a 328-acre tailing pond for a gold mine in South Carolina. The exciting project was completed over a five month period and was another great example of how teamwork and partnering can deliver an extremely successful marquee project.

The project manager for Morgan Corp had this to say about ESI:

“I wanted to let you know how much we appreciate ESI joining our team here at Haile and making this such a successful project. I had my doubts as to whether we could pull off 328 acres in 5 months, but you did not disappoint! I can’t express how great Arizona and his crew were to work with. They are some of the hardest working guys (and gal) I’ve ever been around, and Arizona’s leadership skills are second to none. I can’t say that we would have accomplished our goals on schedule without his vision and help in planning, and for that Morgan is very grateful.”
Ben Boland, PE, Project Manager
Morgan Corp 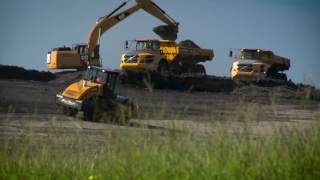 As sub to the General Contractor (Envirocon), ESI recently installed the geosynthetic lining system used to close a coal ash basin at the U.S. Department of Energy’s (DOE) Savannah River site in South Carolina. Our work consisted of installing a Geosynthetic Clay Liner (GCL) and Double-Sided Drainage Geocomposite at this 21.5 acre site.

ESI’s project team confronted many challenges in order to complete the project, including the need to manage through two tropical storms (Bonnie & Colin) that disrupted the construction.

We were able to overcome these obstacles safely and efficiently under the leadership of Field Superintendent Ali Malimar and his crew. The Malone Service Company Superfund Site is located in Texas City, Texas, near the shore of Galveston Bay. The facility operated from 1964-1997 as a reclamation, storage, and disposal facility for waste oil and chemicals. ENTACT who is responsible for the clean-up and remediation of this closed facility. ESI was subcontracted by ENTACT to install a double liner system in a 3.2 acre storm water pond (40 Mil Polypropylene), 30 acres of double lined cells for waste (80 Mil, GCL & composite) then 30 acre cap (40 Mil, GCL & composite). Escambia County, FL inherited the Saufley Landfill, a 23-acre construction and demolition landfill known for environmental issues related to the original closing and capping of the site. In 2006, it was labeled an environmental risk. The county researched solutions and chose to install a 25-acre ClosureTurf® system that would permanently cap the landfill, control gas emissions, deliver clean storm-water runoff, and provide a pleasing green appearance to the site while reducing ongoing maintenance costs. ESI was awarded the business to install the advanced turf closure system, completing the project in 2012.

The project was awarded the 2014 Silver Award of Excellence for Landfill Remediation by the Solid Waste Association of North America (SWANA). ESI was awarded a new cell expansion as General Contractor and Geosynthetic Liner Installer for the State of Virginia's Southeastern Public Service Authority in Suffolk, VA

As part of the project requirements, ESI prepared 20 acres of subgrade and installed over 1,000,000 sf of GCL, 2,000,000 sf of composite and 2,000,000 sf of HDPE liner, with protective cover. In addition, we were contracted to install leachate & groundwater HDPE piping with collection trenches.

ESI received additional incentives on this project due to early completion. ESI completed the secondary containment liner system required for two (2) new above ground biox liquid storage tanks at the Exxon Mobil Refinery (Project Tanks 303A and 303B) located in Baton Rouge, Louisiana. Each of the biox tank foundations were 200’ in diameter and was subdivided into an outer foundation ring and inner foundation ring. ESI utilized 100 Mil HDPE geomembrane liner to complete the foundation secondary containment liner systems required for each of the biox tanks. A 6” wide HDPE sealock strip was cast into each of the concrete ring wall foundations for attachment of the 100 mil HDPE liner to the perimeter foundations. ESI also supplied and fusion welded the 3” HDPE leak detection pipes and fabricated leak detection sumps installed on the outside of each of the tank foundation. ESI was a subcontractor to Cajun Constructors, LLC. from Baton Rouge, Louisiana. Four acres of CETCO AKWASEAL was installed as a water barrier for this project. ESI worked with the general contractor (Grambling Contracting, Grambling, SC) to complete the project. The project is a recognizable and environmentally sustainable corporate campus on a former 65-acre brownfield site and has been awarded LEED-NC Gold for the site. ESI supplied and installed approximately 3,400 LF of HDPE piping ranging in size from 12” to 24” as part of Exxon’s Rockwell Plant expansion project at the Port Allen lubrication facility in Louisiana. The HDPE piping installation was completed as part of the firewater piping system expansion and completion of new drainage piping in the expansion area. ESI supplied all HDPE pipe and fittings required on the project. All of the HDPE piping systems were hydro-tested and service tested prior to backfilling of the excavations. ESI was subcontracted by Cajun Constructors to complete this project. Twin Chimneys Landfill is located on 1,155 acres in southern Greenville County, South Carolina. The municipally owned landfill is a state of the art Subtitle D landfill designed to handle municipal solid waste generated in and around the county. Under the direction of Beard Construction Group, ESI was commissioned to install over four million sf of geosynthetic materials to complete this liner system for Enterprise Product's Brine Pond #8 in Martinville, LA. The system featured 40-Mil Smooth, 60-Mil Smooth and Textured HDPE Conductive Liners, including Geonet, 24 oz Non-Woven Geotextile. HDPE pipes and fittings were fabricated and installed by ESI to allow for groundwater collection and influent, and leak detection. This secondary containment project involved the installation of nearly 10 acres of 60-mil textured HDPE geomembrane, 16-oz. Non-Woven Geotextile and Geogrid to complete the geosythetic liner system for a detention pond and the tank containment dike. ESI was the subcontractor on this project to Beard Construction Group. Located in central Oregon, Waste Managment's Columbia Ridge landfill opened in 1990 and currently has 700 permitted acres. ESI's involvement at this site was to install a multi-layer composite liner system that included an engineered clay barrier and a 60-mil high-density polyethylene (HDPE) membrane to ensure that waste and wastewater (leachate) are contained and isolated from soil and groundwater. ESI has installed a number of cell expansions and closures at this site in Belleville, MI. This photo was taken at US Ecology's cells 6 & 7 which was a 5.7 acre closure project that involved installing a 40-mil HDPE liner including tie-in welding to the existing liner system. Note the pillow ballasts. ESI was contracted by Oscar Renda Contracting, Inc (GC) to install a 60-mil textured HDPE geomembrane liner and the geocomposite drainage layer required for construction of the sedimentation basin project for the city of Corpus Christi, TX. ESI supplied and installed approximately 1,120 Linear Feet of HDPE pipe ranging in size from 2” to 12” as part of Mosaic Fertillizer's RO units upgrade project in Uncle Sam, Louisiana. The project included the addition of three (3) new media containers, two (2) new RO containers, one (1) RO permeate storage tank and a new pump skid. The equipment mechanical piping installation included all associated HDPE fittings, installation of fifteen (15) stainless steel valves and all mechanical connections to the new RO equipment being installed by Mosaic personnel, pump skid and existing unit piping. All work was performed by ESI fusion personnel working directly with Mosaic operations and maintenance personnel. Upon completion of the installation the new mechanical piping system was pressured and tested prior to startup of the new RO units equipment. Virginia Waste Services is a privately owned waste company specializing in commercial and industrial waste disposal in the Richmond, VA area. The company contracted ESI for a 6-acre new cell expansion at their Shoosmith landfill in Chester, VA. ESI installed 60-mil HDPE textured geomembrane, geocomposite and geosynthetic clay liner to complete the base liner for the landfill. Morgan Corp contracted ESI to install a geosynethetic liner system as part of the final closure system for this 130-acre site located in Jackson County, AL. The liner system included a 40-mil LLDPE textured geomembrane and geocomposite for drainage. ESI supplied and installed a 60 Mil Textured HDPE Liner and a double-sided composite as a drainage layer at this 26 acre Coal Combustion Residual cell expansion at TVA in Kingston, TN.